The Ensemble explores the thrilling world of tango and has distinguished itself as an ambassador of the musical genre in Canada and abroad. The Ensemble interprets and continues the tradition of the great tango orchestras of Buenos Aires. The various repertoires and recordings from the Un siglo de tango collection and have been acclaimed by the public and critics.

Founded in 1990 by bandoneon-player Romulo Larrea, the septet is comprised of talented and experienced musicians. Under the musical direction of Larrea, the Ensemble developed a unique artistic approach to become a reference for tango aficionados, neophytes or experts.

The musicians of the Ensemble

François Pilon, first violin
Member of the Romulo Larrea Ensemble since 1995, François began to study the violin at the age of five, with Mr. Hratchia Sévadjian. He graduated from the Conservatoire de Musique de Montréal where he obtained the first prize with distinction. He is also co-artistic director of Le Kiosque à musique. François regularly works with renowned Quebec artists and participates to numerous recording sessions for films, television both as a musician and as a producer. Since 1999, he has been the assistant to composer and conductor Simon Leclerc.

Frédéric Lefebvre, violin
Member of the Romulo Larrea Ensemble since 1995, Frédéric began to study the violin at the age of 4 with Les Petits Violons of Jean Cousineau. He graduated from the Conservatoire de Musique de Montréal and was, from 1990 to 1997, a grant recipient obtained from the Laval Arts Foundation. He was awarded in 1995 the grant of excellence from the McAbbie Foundation. He is a member of the Orchestre Classique de Montéal and has performed alongside singers and performers as diverse as Luciano Pavarotti, Charlotte Church, Rod Stewart, Diana Ross, Ginette Reno, Jimmy Page and Robert Plant. He frequently participates to recording sessions for television, radio or movies. Since 2002, Frédéric is a violin professor and responsible for the strings section in music concentration program at Marcel-Vaillancourt school in Laval. 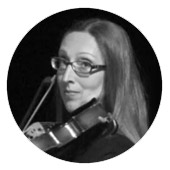 Ligia Paquin, viola
Member of the Ensemble Romulo Larrea from 1995 to 2000, she returned as of 2013. Ligia graduated from the Conservatoire de Musique de Montréal. She regularly performs with various ensembles and orchestras and is very active as a studio musician (recording). Ligia also collaborated in recordings for many Cirque du Soleil productions and has formed part of the musical teams in over 30 films and TV productions. She has toured with many artists from both the jazz and popular fields. Ligia also works with flutist and composer François Richard. 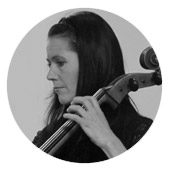 Sheila Hannigan, cello
Member of the Ensemble Romulo Larrea since 1999, Sheila completed her studies at the Université de Montréal and obtained a Master in interpretation in 1993. She then obtained a grant from the Conseil des Arts et des Lettres du Québec to complete a master class with Eugene Friesen. Sheila often performs with several ensembles and orchestras and is very active as a studio musician (recordings). She also works with the jazz/arabe quartet Absinthe, with the Rémi Bolduc Trio and with the ensemble Cordâme.

Yannick Chênevert, double bass
Yannick works with the Ensemble Romulo Larrea since 2008. He completed his Masters at the Conservatoire de Musique de Montréal, with honours in 1999. He is a versatile musician who easily assimilates several genres of music, be it classical, Baroque, modern, popular music, jazz or world. Yannick is also a member of the Nouvel Ensemble Moderne and I Musici. He works with major ensembles and orchestras of the Montreal region and is particularly active in studio recordings.

Martin Dubé, piano
Martin works with the Ensemble Romulo Larrea since 2010. He made his piano studies with Michel Frank and Robert Weisz, at Laval University, and completed his master's degree in chamber music with Marina Mdivani at McGill University. He was a fellow of the Manhattan School of Music, where he studied in "vocal coaching" and in accompaniment with Warren Jones. His activities led him to perform at major venues throughout the US and Canada and he also performed on WQXR radio in New York and for the CBC. Martin acted as vocal coach at the Juilliard School of Music in New York and at the Chautauqua Institution. He was also vocal coach at the Curtis Institute of Music in Philadelphia and at the Opera of Philadelphia. He is a licensed coach at the University of Montreal and at the Atelier Lyrique of the Opéra de Montréal; he is also an official accompanist at the International Singing Competition in Montreal. Martin teaches at the Conservatoire de Musique de Québec.